Fisher Island is an exclusive,  man-made island located three miles off the coast of Miami… an offshore paradise. The prestigious island community was once owned by the Vanderbilts and to this day is accessible only by private yacht, helicopter or ferry. Fisher Island had the highest per capita income in the entire U.S. a decade ago.

The island was formed by dredging in 1905 and was originally named for Carl B. Fisher who purchased the property and began construction in 1919.  Only six years later, in 1925, Carl Fisher traded ownership of the Island to William K. Vanderbilt II in exchange for a luxury yacht. After the 1944 death of Mr. Vanderbilt, the owner became Edward Moore, heir to U.S. Steel. In the early 50’s, Moore died and Gar Wood-millionaire inventor of hydraulic construction equipment-bought it. Wood made the island a one family oasis. He sold the island in 1963 to a development group which included George Smathers (a U.S. Senator and Miami native), millionaire Bebe Rebozo and then former U.S. Vice President Richard Nixon).

In the 1980’s, further development was started on the island with architecture similar to the original 1920’s Spanish style mansions. The island, no longer 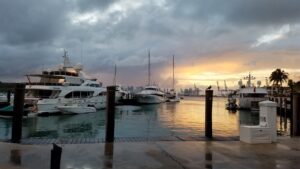 owned by a single family,  is still as exclusive as it once was, making it somewhat inaccessible to uninvited guests and the public. Oprah Winfrey, Julia Roberts and  Boris Becker are all celebrities with homes on Fisher Island. The island offers luxury single family residences and stunning condominiums.  There is also a hotel, fine dining, country club, tennis and golf, private dock space, a post office, schools, and beautiful  white sand beaches… and the common form of transportation around the island is by golf cart.