Miami Beach is famous for its pristine beaches and popular nightlife. Noted for its Art Deco Historic District, Ocean Drive and Collins Avenue, Miami Beach welcomes tourists and locals alike. Lincoln Road is notorious not only for its shopping and dining, but it’s also a great place to people watch. The Miami Beach nightlife is just as popular and every so often, you may rub elbows with celebrities. With so much to offer, Miami Beach is the ultimate destination hot spot. 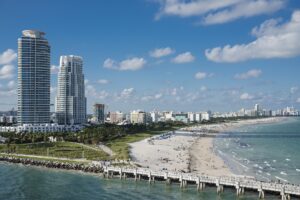 Miami Beach began as a plantation tract for coconuts when Henry and Charles Lum, two entrepreneurs, purchased 160 acres of what today is known as South Beach. Their architectural plans failed and the land was passed onto John Collins, a Quaker from New Jersey who planted the first grooves in Florida. In the nineteenth century, much of the land was a marshy waste but today the cypress swamps are restricted to the Everglades National Park. The Army Corps of Engineers, followed by Carl Fischer dredged the thick mangroves to create Miami Beach.

In the 1900’s, Miami, just across Biscayne Bay, was already booming and many entrepreneurs recognized great potential in Miami Beach. In 1912, the Lumnus brothers found the Ocean Beach Realty Company in Miami Beach and so began the first wave of construction.

The years following saw rapid development with the construction of the Collins Bridge (“the longest wagon bridge in the world”) and the opening of many oceanfront restaurants, including Joe’s Stone Crab-a Miami Beach icon. In 1914, the first hotel in Miami Beach, the W.J. Brown, opened its doors.

In 1996, the city of Miami Beach celebrated one hundred years of existence as an independent, self sustaining paradise.

In that time, the city has seen two world wars, the elegance of the nation’s Golden Age (the 1920’s and the Great Depression).

Today, the Art Deco National Historic District, Lincoln Road and Espanola Way are just some of the places that maintain Miami Beach’s history and attract visitors and locals alike.

Locals and tourists alike may catch a glimpse of a celebrity or two as they stroll through or enjoy one of the many cafes. 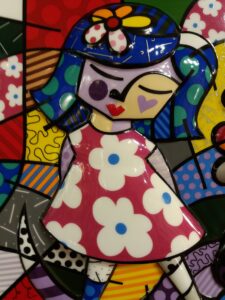 Originally covered by a forest of mangroves, the site was cleared by Carl Fisher in 1912 and it became the town’s social center.

In the 60’s, Morris Lapidus– a Miami Beach architect who designed the Fountainbleu and Eden Rock Hotels, was commissioned to redesign Lincoln Road. Lapidus’ design featured ountains and an amphitheater, reflecting Miami’s Modern Architechture (MiMo) style that he pioneered in the 1950’s. The road was closed to vehicular traffic and became of of the first pedestrian malls in the nation. Today Lincoln Road features a concert hall for the New World Symphony Orchestra, a state of the art multiplex cinema, fine restaurants and bars. Lincoln Road is also home to many galleries of emerging artists as well as the Colony Theater, which was newly restored. It remains a popular stomping ground for both tourists and locals.