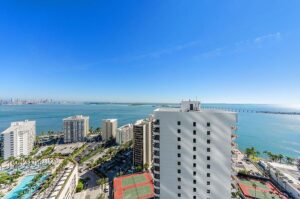 In the 1870’s, pioneers William and Mary Brickell maintained a trading outpost in the area that has now become Brickell. Mary envisioned luxurious waterfront estates and Brickell became than and then literally exploded into a burgeoning city center. Coined “Millionaire’s Row,” the area became highly sought after and prestigious. The Brickell skyline changes and morphs. Office towers and luxury condominiums replace grandiose mansions, keeping Brickell a main center of trade and commerce.

Brickell, at the forefront of international business, with a constantly changing skyline of Luxury high-rise residences has created quite the lifestyle. Residents enjoy being in the center of it all, near the office. Within minutes of both South Beach and the Miami International Airport.

Over 4,000 new buildings were erected between 2001 and 2005, making the Brickell skyline one of the most famous in the world. Brickell residents enjoy breathtaking views of Miami, Biscayne Bay, Miami Beach, Coconut Grove and Key Biscayne. Miami is at your fingertips…the Miami Heat plays at the American Airlines arena only a couple of minutes away from Brickell and the Miami Dolphins and Florida Marlins play at Dolphin Stadium just about 20 minutes north.

Continuously growing Brickell maintains the same charm and upholds Mary Brickell’s pioneering vision of what the area should, and has become.

Brickell is the nouveau chic place to be. Located next to Downtown Miami, it is an area with much to offer, including banks, businesses, shops, restaurants and condos. There are spectacular views of the Bay and Miami River. It has quickly grown into a bubbling metropolitan area. Brickell is what makes up the beautiful Miami skyline. Mary Brickell Village is new to the face of Brickell and has quickly become the place to be. It features restaurants, shopping and nightlife, with places like Rosa Mexicano and Blue Martini. Brickell Key is an island off Brickell, with upscale condos and hotels.